Christo’s Colorado Project May Hinge on Sheep, By JOHN COLLINS RUDOLF, Published: May 17, 2011

Nearly 20 years after the artist Christo and his wife, Jeanne-Claude, proposed draping a river canyon in southern Colorado in miles of translucent fabric, a federal thumbs up or down on the project may hinge on one factor above all others: the happiness of several hundred bighorn sheep.

A drawing of a proposed art project would suspend 5.9 miles of silvery, translucent fabric above parts of the Arkansas River in southern Colorado.More Photos »

A blog about energy and the environment.

Go to Blog »
Enlarge This Image 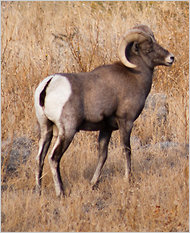 Crucial to the federal government’s decision, expected in August or September, will be a final environmental impact statement on the $50 million installation, known as “Over the River,” that federal land managers plan to unveil in coming weeks.

Some wildlife experts worry that sheep could be displaced or even harmed if the fabric is unfurled over 5.9 miles of the Arkansas River between Salida and Cañon City. Last week the Colorado Wildlife Commission voted unanimously to urge federal officials to reject the proposal, citing in part its concerns about the bighorn, Colorado’s state animal.

The commission is only an advisory body to the State Division of Wildlife, but its views are expected to carry weight with the federal authorities who will make the final call on the project.

“If there was one overreaching concern of the public, it probably would be bighorn sheep,” said Robert Streeter, vice chairman of the commission. “In terms of data and looking at the science, they’re the most likely species to be impacted.”

“Somebody has to weigh — is the artistic expression more important than an ecosystem?” Mr. Streeter said.

Opponents cite other reasons to reject the project, including traffic noise and fumes and the potential impact on birds and bats, which might become tangled in the fabric or hurt or killed by flying into support wires exposed during construction.

Supporters, including Gov. John W. Hickenlooper, say the project will jump-start tourism and raise the state’s profile as a destination for art lovers. Bighorns are hardly an endangered species, they add; their numbers are estimated at about 6,900 in Colorado and roughly 70,000 in all Western states.

Mr. Streeter acknowledged that the State Wildlife Commission did not view the project as having a potentially catastrophic impact on the bighorn. Nonetheless, he said, “it could push the bighorn away from the water and impact their survival through the winter.”

Others take a more dire view. In a letter to federal land managers in September, Daniel J. Larkin, a former president of the Rocky Mountain Bighorn Society, a nonprofit conservation group, warned that the installation had the potential to affect “hundreds” of the wild sheep.

“Sheep are a stress-sensitive species and are susceptible to large die-offs when conditions are not favorable,” Mr. Larkin wrote.

Yet many others call concerns over the safety of the sheep overblown. Merle Baranczyk, the editor of The Mountain Mail, a newspaper in Salida that has followed the controversy, noted that railroad tracks and a major highway with heavy truck traffic parallel the river canyon, and that the animals had most likely become habituated to human disturbances.

“This is not a pristine canyon,” Mr. Baranczyk said. “If they’ve lived with the highway and the railroad, this says to me that the project is not going to be causing problems for them.”

Both a local and a statewide chapter of the Sierra Club declined to take a position on the project. “We didn’t believe it was a big deal,” said Ross Vincent, the local chapter chairman. “If it’s done well, the impacts should be minimal and manageable.”

In an e-mail, Christo said he had made changes to the project’s construction schedule, which is expected to last several years, to lessen the impact on the sheep. He said he had also offered to provide “substantial funds” for bighorn sheep habitat enhancement projects.

The environmental impact statement, he said, “is providing a thorough analysis of all potential impacts with special attention devoted to bighorn sheep.”

“I am confident they will be protected,” Christo added.

Some previous installations by Christo and Jeanne-Claude have also been challenged on environmental grounds, like “Running Fence,” a 25-mile curtain of fabric stretching along the California coast. That project was ultimately approved and installed in the 1970s after intensive study and a lengthy public comment period.

Supporters of the Colorado project, meanwhile, point out that the bighorn sheep are hunted for sport in the river canyon proposed for the installation. Hunters kill about 3 percent of Colorado’s bighorn sheep each year, and tags to kill 12 of the animals are given out annually in the area where Christo’s work would be installed, said Theo Stein, a spokesman with the Colorado Division of Wildlife.

So far, biologists charged with evaluating the project’s potential effect on the bighorn have taken a cautious approach, writing in a draft environmental impact assessment that the project’s effect on the sheep was “clearly novel and unpredictable.”

One unknown is whether the bighorn will tolerate the presence of the panels, which will be suspended 25 feet in the air, when approaching the river to drink. If the sheep are driven away from the river, it could lead to stress and illness, potentially harming reproduction or survival in the winter, the biologists wrote then.

Others wonder whether the bighorn, accustomed to traffic in the canyon, might quickly grow used to the hanging fabric — and possibly enjoy it. “There will be a little bit of shade in August, and it might be a nice place to munch grass under,” said Mr. Baranczyk, the editor.